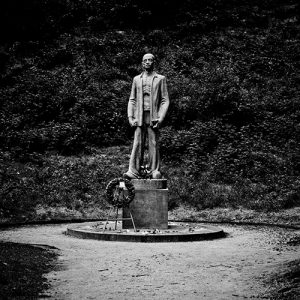 I use to live very near this statue, but as it is quite hidden in the forest and not really has much signs pointing towards it, not strange that I completely missed about it for years.

However, in the second world war quite some political prisoners were placed in kamp Amersfoort. Too many have died in the camp. Nowadays you can visit the place. It has a information center where you can learn what has been going on in the war at this camp.

Talking about the actual statue, the name of it is ‘De stenen man’ (the man of stone). Its maker is Frits Sieger who was in prison himself during the war. Visitors walk via the shootingrange of 320 meter to get there. Then, they see that this place is not forgotten yet. Many memorial items are placed near ‘De stenen man’, indicating that we do not forget about the misery even after many years.

I often walk near this place, it has a bit sinister touch. But regardless the bitter taste that hangs around it, the place has some serenity too. Is the statue something you should see? Definitely! But, don’t just stick with that. Take a tour over the area, visit the informationcenter. See the rose garden, which is not what it sounds like! Finally, you can say after seeing it all: war never leaves. One does not simply live on, but for generations that follow it is story that is real. Every family has a story of war victims. A story that needs to be heard and remembered. Because, no such horror should ever have to occur again. Maybe it helps people being a bit more kind to one other.

More random things I have seen in Amersfoort, click here.