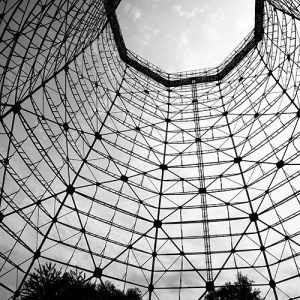 This photo is hanging in my own livingroom, that is how much I like it. I think that by now it is clear I enjoy geometric shapes and this photo has quite some of that. It is a field full of lines and triangles, squares, hexagons, ladders and even an octagon. But what strikes me so much in this photo is the way it is brought together in an industrial setting. Obviously this thing had a function once, it may be in use somehow now also. They are not that uncommon actually, I saw multiple while travelling.

But this one is a bit more elaborated than others. Actually, I do have a photo of one that is covered in wood. The fact that this one is open and raw gives it so much more charm. Eventually, these wooden ones will be out of use, getting stripped to the bone and have a similar look as this one.

In my mind I see myself climbing towards the sky. Seeking some higher grounds and observe the surroundings from there, but naturally I did not want to bring distress by people living near it by just doing that. How much fun is it to think about putting lights on these, like it would be part of Glow Festival. Or use coloured strings to go from one side to the other to decorate it, making it just a bit more colourful.

The cloudy weather caused that I have transferred the photo to black and white. This way I could highlight the moody industrial atmosphere that hangs around it, the whole area actually. Brings me back to the previous mentioned ideas to spice it up and make it part of a more colourful world.

Do you want to see more random geometric things I saw?  Click here.